skip to main | skip to sidebar

I have been on a mission to de-clutter my life lately - not so much the worthy, esoteric kind of emotional de-cluttering, but simply getting rid of things that take up space. Now I don't exactly live in the kind of rambling mansion that runs to attics and cellars filled with generations worth of hand-me-downs and heirlooms, and I am generally quite good with throwing things out - no hoarding issues here, thank you very much. But like anyone who makes things, be it as a hobby or a career, I have started to accumulate projects in various stages between 'just needs finishing off' and 'gotta start that one day', so I have made a vow to tackle these one by one, and only start something new once something old has been ticked off my list.

Since my interests are varied enough this should be ok, as I can flit between knitting, embroidery, sewing etc etc, which is handy as I get bored easily. More to the point, though, I hope that this will finally give me more of an impetus to document my work more regularly.

On that happy and optimistic thought I shall leave you with a small piece I made a few years ago and that re-surfaced during the cleaning / de-cluttering rampage. It is based on the work of art collective eboy , and in case you were worried, it has already been re-homed to Hackney... 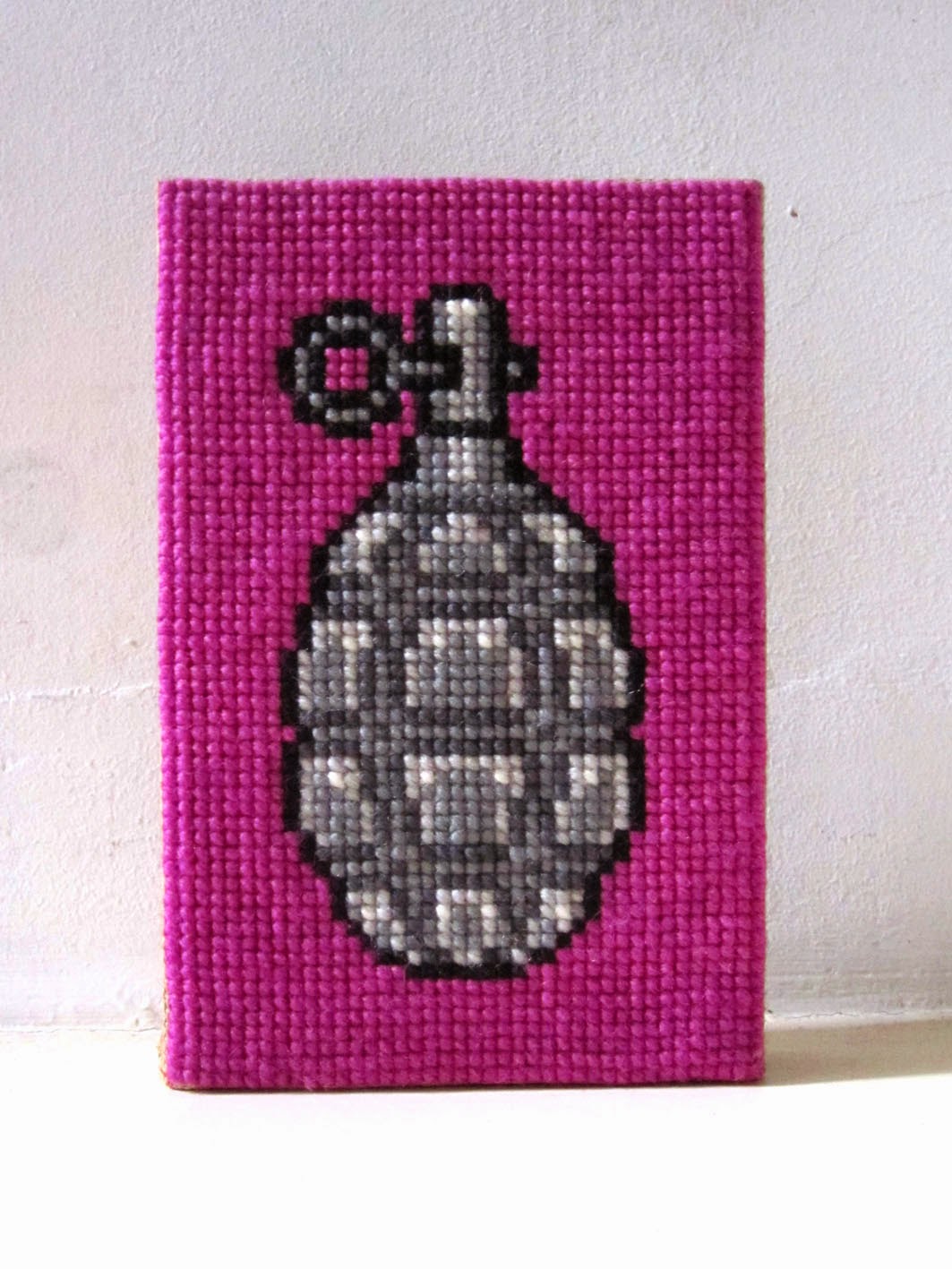 Posted by General Hogbuffer at 21:48 5 comments:

Although I have unforgivably neglected my blog over the last few months years, I will try and make more of an effort, at least until January and all its determination to stick to New Year's resolutions are well and truly over...
So, Happy New Year, all !!!

Notice the quotation marks in the title ? Yeah, not a typo, sadly. Actually I felt that the way the term 'craft' (and 'crafting') is being used lately made it necessary to qualify the word slightly. Do not get me wrong: I know it is a great trend at the moment, and I wholeheartedly support anybody who gets up and makes anything with their own hands rather than purchasing a mass produced product. Equally, I am aware that ability and dare I say talent are not evenly distributed, so the first garter stitch scarf knitted by person A might mean a whole lot more than yet another 20 colour fair isle jumper produced by person B.

But I feel the way this trend has been bandied about and presented in the press lately leaves a lot to be desired. Ok, it needs to be accessible, people need to feel like they can be part of something without committing to a 5 year intensive learning curve - I totally get that. But pressing a motive out of a die cast sheet and sticking it onto a pre-folded piece of card does not make you a master card maker. It certainly doesn't make you creative, regardless of what the manufacturers of certain craft product would have you believe.

I collect vintage craft books, and I have learnt the bare essentials of what I do from both of my grandmothers and my mother. Based on this and the assumption that I do not happen to stem from a long line of household paragons, I would say it's safe to assume that the average skill level has somehow diminished over the decades. That is totally understandable; neither of my grandmothers would probably have been able to send an email, and I wouldn't want my mother let loose on Photoshop, so something's got to give.

But each time I see somebody write about "crafting" as if it's this amazing new thing that is 'so now', and each time I see someone trying to sell a badly stapled-together piece of tat on Etsy with the air of offering a great artisan piece, a little voice inside me wants to just scream and scream until it all disappears.

Feel free to use the comments to discuss, I would love to hear (read?) your take on this.
Posted by General Hogbuffer at 21:59 9 comments:

Born to be wild

... ah, the rural idyll of inner London. I wonder if it's the state of our back yard that encourages the more picturesque wildlife ? 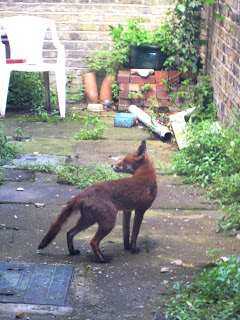 Posted by General Hogbuffer at 09:08 3 comments:

Yes, this is a post all about love. Or Liab, to be more accurate (and Bavarian). In traditional Alpine knitting, there are several variations of single twisted stitches weaving over and under each other, and they are generally known as Liab (Love).
To Illustrate what I mean, here's a scan from my favourite go-to book when it comes to Alpine knitting, Baeuerliches Stricken by Lisl Fanderl. 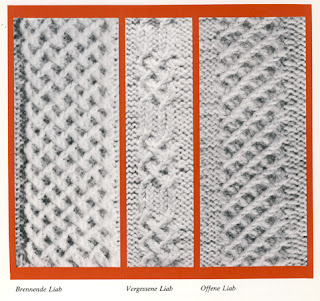 Brennende Liab (burning love) creates essentially a plain weave effect, Vergessene Liab (forgotten love) has lengths of no crossing in between, and Offene Liab (open love) has one direction of stitches always over the other direction. Since these patterns are centuries old, I don't think Offene Liab would signify an open relationship, but you never know...
The reason I am blathering on about this is that I have just released another pattern which uses the same principle, albeit with two stitches moving across the ground each time. It's on Ravelry here . 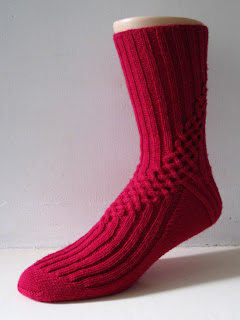 Posted by General Hogbuffer at 21:28 4 comments:

Today I uploaded another pattern onto Ravelry, Kraut . I wouldn't normally blog about this, but I then I don't normally blog about ANYTHING, it seems. Time to change that, still early enough in the new year to make an effort, right ?
Funnily enough, I have been called many thinks since I moved to London (all in jest and jolly good fun, I assume...), but Kraut wasn't one of them, probably more of an American thing, I guess ? Anyway, I liked the bluntness of the word, and the sock was designed for the January challenge in the Sock Knitters Anonymous group, which was Flora or Fauna themed. Predictably, there are lots of socks with pretty flowers and butterflies being knitted, and they are all beautiful, don't get me wrong, but just not for me. 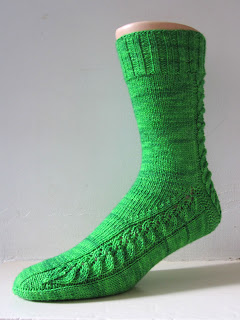 I was briefly toying with a cockroach sock, but I had this eye-searingly bright green yet to use up, so this was a natural match, and over all, I am quite happy with my (un)kraut.
Posted by General Hogbuffer at 21:27 5 comments:

... for Christmas, that is. Since the department stores and supermarkets have been very subtly hinting for months now that, would you know it, there is going to be a Christmas AGAIN in December this year, I have taken the hint and started working on this year's decorations. I wanted to make some baubles for a while, and after looking at various patterns that are available, I decided that I would do my own version. It's not re-inventing the wheel, since it's a sphere shape, but I like the way it leaves several options for decoration.
On a visit to Loop in Islington this afternoon I also saw the fabulous book by Carlos and Arne 55 Christmas balls to knit, which I love for the variations, but I have to say I prefer my versions, because they are perfectly round, which is thanks to the styrofoam ball inside. It's a bitch to knit around it, but I really don't like it when they look like a lopsided dumpling, which is the look I usually manage to achieve with toy stuffing.
Enough waffling on, here is the first beauty shot of the fair isle versions. All the same pattern in the same colours, just different configurations: 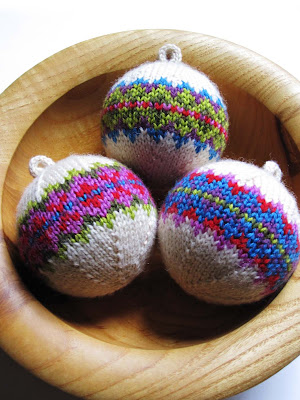 I also did a few more classic red / white combos, and I found a willing stand-in for a Christmas tree: 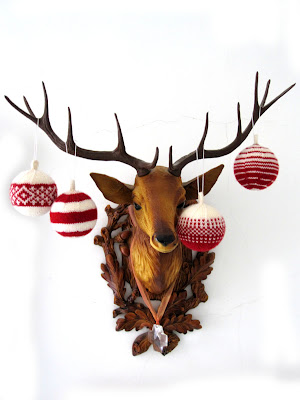 Pattern is on Ravelry here!
Posted by General Hogbuffer at 00:02 1 comment:

YES ! And again - YES !
Santa brought me a new camera for Christmas, so no more excuses for not taking pictures, not writing posts, not updating the blog - you get the drift...

Since, however, I still have to figure out a way of setting up a background that won't make all of the living room unusable for hours, I am just experimenting for the moment.

Never mind all this, here is the first of the new batch, reasonably current - Chester. 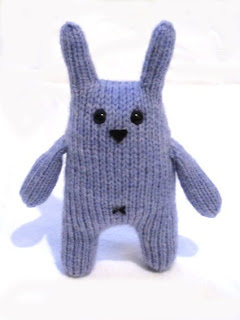 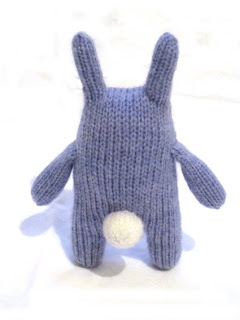 The name is original to the pattern, and somehow I found it a perfect match, so that's his name. His backstory (he would have a backstory, wouldn't he ?) is as follows:
We did a secret santa at work, and I wanted to give something I made myself, so Chester was the result. I then got a severe case of second thoughts, and made a second one, in green, without the ears and with fangs instead, more of a monster, really. So I kept Chester, and gifted the green monster instead, which was quite a good call, as the recipient was somehow less than impressed with my gift, not really knowing what to make of him. Turns out that these secret santa gifts are meant to be "hilarious" and provide entertainment during the Christmas dinner... before you ask - I got a pair of plastic Elvis shades with sideburns attached. Yes, I am aware that I need a new job...
Posted by General Hogbuffer at 16:20 5 comments: